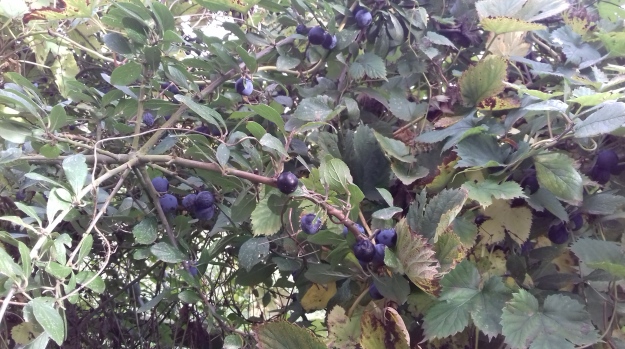 Sloes – the fruit of the Blackthorn bush. Inedible by themselves but transformed by gin and sugar

After entering the Rotterdam marathon on Thursday, Friday saw my regular run to the gym and back with a friend, and 30 mins weights. Only 4.7km (3 miles) but done at just under 4 hour marathon pace so some encouragement there.

I took Saturday off from exercise but went sloe picking. It looks like a great year for sloes after the hot summer and they were certainly ready, even though it’s at least a week or two earlier than I’d normally pick them.

I have about five or six places I can go for sloe picking – in a bad year I’d have to go to all of them to collect enough – but this year from just the smallest I’ve got enough to make 5 litres of sloe gin and put some in the freezer as a hedge against a poor year for sloes in 2019.

I have high hopes for the current batch which is great as a replacement for a glass of port after a meal – but, in as my late mother-in-law used to tell the children, is definitely ‘sippers, not gulpers’.

Ironically, I’ve run less this week having signed up for the marathon than I have in recent weeks. It’s an attempt to finally sort out the ‘tendons which must not be named’ which are improving but not quite back to normal.

I’m planning to do a 20 week diy marathon training programme so I have about 6 weeks before that starts. Do I take advantage of that and start training now, or will doing too much now mean I peak too early (assuming I do actually reach anything that looks like a peak) or generally burn myself out?

Good sense says take it easy to reach the start of the 20 weeks in decent shape – both in fitness and absence of injury.

Congratulations to Alejandro Valverde and Anna van der Breggen on their World Road Race titles and Europe in the Ryder Cup – great sport.

2 thoughts on “Life in the sloe lane”