Monday was a rather bleak day among many others this year. Travel bans, new variant Covid, Brexit trade talks deadlock, lockdowns and the ‘loss’ of the family Christmas. Roll on 2021?

As if that wasn’t enough, my expectation was that the BBC had omitted me from the Sports Personality of the Year nominees because they were going to unveil me as the surprise winner during Sunday’s live programme. They didn’t. Lewis Hamilton won.

I took refuge in the gym where I was the only person for most of my hour. I hate to think what their finances look like at the moment but I enjoyed it.

After bemoaning how the Fantasy Football league was spoiling my enjoyment of many of the matches, I appear to have won last week with a record score and taken the top position in the league. It just makes the inevitable fall all the further and all the harder when it comes.

Running on Tuesday with our younger son – the regular 10.2km (6.3 miles) with the light relief of a painful right ankle for a bit of it. If I can invent the game of ‘body hurt bingo’, I am very close to calling ‘house’.

Back to the gym again on Wednesday and a 7km (4.34 miles) run with my wife and our younger son on a cold but bright Thursday – Christmas Eve. A slightly brighter Christmas Eve than expected as the conclusion of a trade deal was announced between the UK and the European Union. A cross between the Holy Grail and a shameful sell-out if you listen to the rival politicians – no doubt time will tell that it is neither but it will be good to move on from Brexit.

Christmas day was, of course, different from usual and from what we had planned. Our older son was in London (happily not on his own as his girlfriend was with him) and my wife’s family were in Surrey and Hampshire so we had various video calls – not quite the same but surprisingly good. The food and drink were, at least, unchanged in quality and quantity.

We went into the UK’s Covid tier 4 on Boxing Day, it’s the highest level of restrictions with a basic ‘stay at home’ message. That’s the gym closed again for a while, along with non-essential shops and leisure services. The county had 8 cases of the new variant of the virus just before Christmas, all the the City of Oxford itself.

I guess we are caught because of proximity to more worrying areas and because it’s simply not possible to give the restrictions enough ‘texture’ to carve out specific towns or villages. Our local authority area has had the lowest infection rate in the county – long may it stay that way.

The three of us went for a good walk on a cool, breezy but sunny Sunday – just under 4km (about 2.4 miles) around the sodden fields behind the house but a great bit of fresh air after Christmas. We saw three other people, but nobody within 100 metres.

1. African wise words: Do not call a dog with a whip in your hand

The newly-weds were seated outside a grand government building while guests slowly drove past in their cars. The windows had to remain rolled up and guests only got a socially distant wave from the wedding party. The guests were treated to a dinner – but had to pick up their pre-packed food through their car window and drive on.

The report says the celebration came a day before the groom’s politician father was found guilty in a $500,000 (£370,000) corruption case and sentenced to a fine and 12 months in prison, stayed, pending an appeal.

The Chilean Army reported 36 personnel at its Bernardo Riquelme O’Higgins base have tested positive. Antarctica had been the last continent without a case of the virus

Few people had heard of Professors Chris Whitty or Jonathan Van-Tam at the beginning of 2020. Now, after months of featuring on governmental briefings, England’s chief medical officer and his deputy are proving a hit with shoppers.

An online search reveals the faces of the two unlikely cult heroes on novelty mugs, T-shirts, beer labels, birthday cards and even prayer candles. “We have Britney Spears and Michael Jackson designs,” says the co-owner of a gift business. “Chris Whitty is outselling them all.” 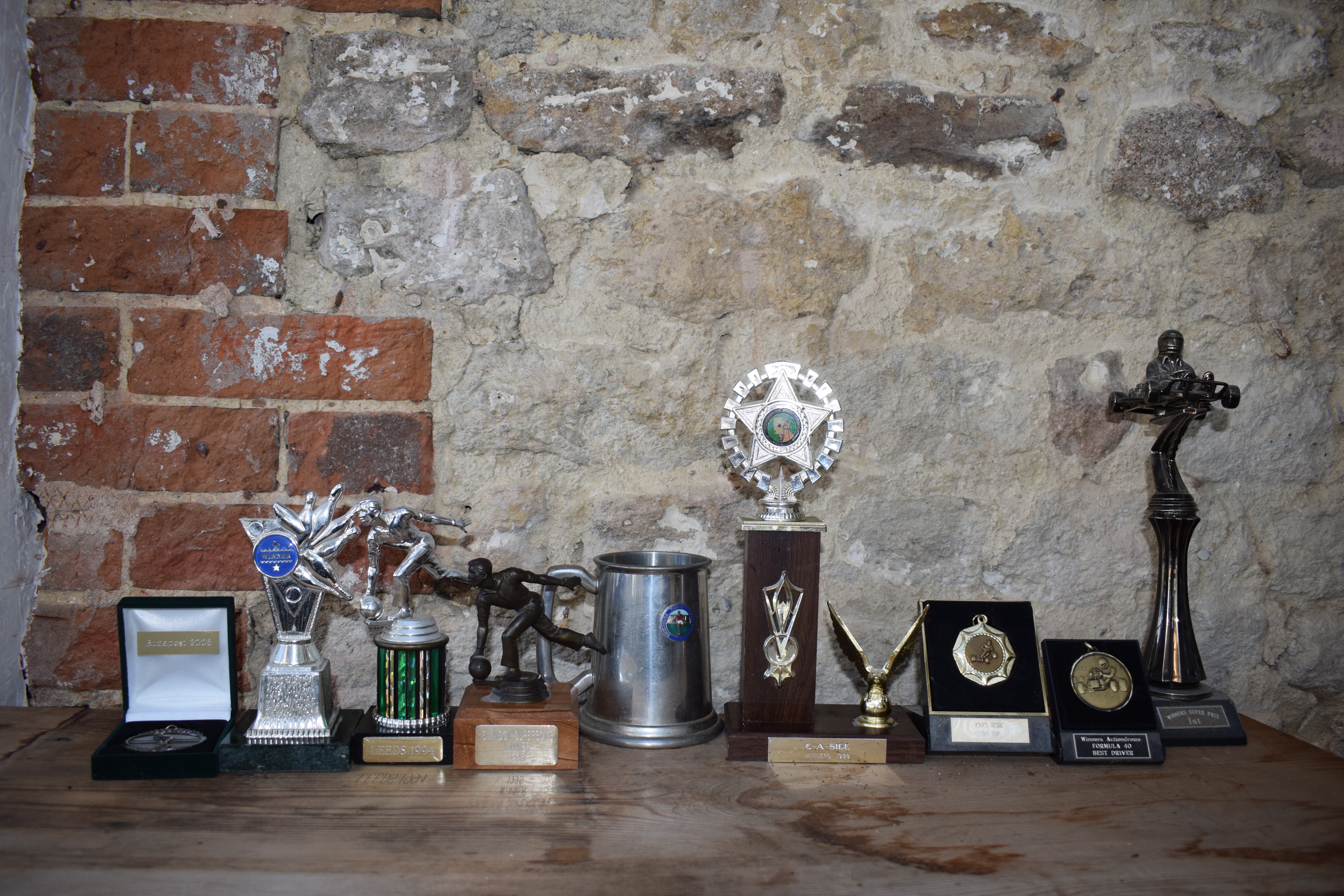 Sadly, I didn’t make the short list … or long list … or any list. With minimal prowess at pool, 10 pin, table football, (dominos – couldn’t find the trophies), cribbage and karting, I fail to see why.

OK, this is a bit parochially British as it’s the BBC’s award – but US friends might be pleased to know that Tom Brady, Katie Ledecky and Tatyana McFadden are among the candidates for the overseas award (but watch out for Roger Federer who has a very large fan base over here). No doubt Tom Brady is already losing sleep over whether or not he will win – clearly it would be the crowning glory to his career!

The 12 candidates for the main prize (presented on 17th December) are all very skilled and dedicated sports people – and certainly worthy of their places on the list (seven of them world champions or multiple world champions, such as Mo Farah, Adam Peaty, Elise Christie and Jonathan Rae). I’d love to have even a small fraction of the abilities of any of them but, with respect to the others, for me there are really 3 main contenders: Chris Froome, Lewis Hamilton and Anthony Joshua.

It’s probably worth saying that sports ‘personality’ might be a bit of a misnomer. Really it’s an achievement and popularity contest – personality is not quite as important as the award title might suggest (Andy Murray – undoubtedly a very fine tennis player – has won three times …. enough said).

Pinning my colours to the mast, I love cycling, I like F1 and I’m not really enamoured with boxing – but trying to put that personal prejudice aside, how can a sensible choice be made between them?

Hamilton is one of the best drivers of his generation – perhaps of any generation – but he has the disadvantage of being in a sport where your personal abilities are not enough, you need to have a great car. Hamilton wouldn’t have won the world title driving a McLaren, or a Renault, or a Haas this year. Equally it’s not all about the car because Bottas (a very good driver) failed to beat Hamilton on the majority of occasions, despite also having the Mercedes beneath him.

F1 has lost some of it’s competitiveness and sparkle in recent years and is perhaps too inaccessible to most fans (locations, prices and driver lifestyles) – it will even be off free-to-air TV soon in the UK so the pressure is on it as a sport.

Froome has the advantage over Hamilton that the technology in cycling does not create the clear-cut advantage that it does in F1. The Pinarello is a fine bike but there are UCI weight limits, most teams seem to use Dura Ace and I’m not sure any bike in the Grand Tours is significantly better than any other.

Froome’s double of Le Tour and the Vuelta was magnificent, and to win 4 TdFs puts him up with the very best. His difficulties in the Sports Personality competition probably include: Team Sky’s poor handling of the Therapeutic Use Exemptions matter, and the continuing stigma of doping in the sport; being part of a Sky Team that win too much for many people’s liking; Sky’s ‘marginal gains’ philosophy which is efficient but not thrilling; and the view of many that Chris himself is bland and too indebted to the strength of the team.

Joshua won the WBA world heavyweight title this year to add to his IBF title – then successfully defended them both in October. Great achievements and ones delivered in one of the hardest and most basic of environments, mano-a-mano.

The trophy is awarded after a public vote so, as I say, much depends on the individual’s popularity and the public’s interest in, and understanding of, the sport involved. I guess that probably makes Joshua the favourite – and if he was putting his case to me in person, I’m sure I’d be quick to agree ….

…. but personal prejudice and preference runs deep and it’s Chris Froome who would get my vote. With a combined six weeks of sustained pressure and extreme exertion, achieving what only two men had done before in the Vuelta/Tour double and getting to four TdF victories (with three in a row and four in five years), he has joined the all-time greats in my eyes.

Who knows, if he wins the Giro, the Vuelta and the Tour in 2018, he might get wider credit and recognition.

He might even get second place in Sports Personality 2018, as runner up to a member of the team that won the 6-a-side Ridgeway Cribbage League of 1988 …….. now, who could that be?