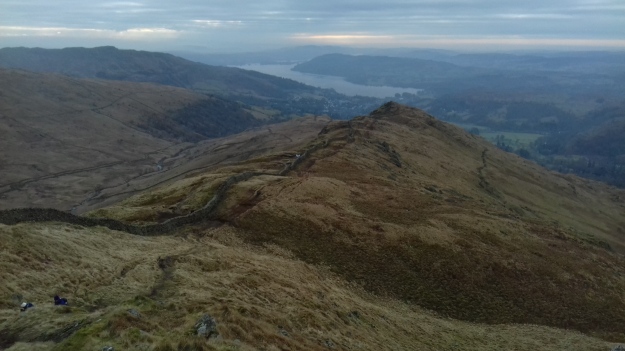 Possibly Low Pike, looking down from High Pike, with Windermere in the background – or possibly somewhere entirely different

After shifting the sciatica I brought on myself back in November, the drive down to the alps went well on Boxing Day, the skiing went well but the return journey brought the sciatica back. Goodness knows how – same length of journey, same car, same seat, same seat settings … it just did.

I was taking it easy but had gone up to nearly 72kg and was suffering with a good dose of what they are calling an epidemic of Australian flu (generous people the Australians, not only were they happy to give us a beating in the cricket but they send over their flu – thanks guys).

It all meant that I was rather tired of doing nothing and after a week I decided I’d been idle for long enough and thought I’d see what exercise I could do without hurting it more.

Lunges and sit-ups were out but crunches, press-ups and ‘from sitting to standing, using just one leg (arms folded so no impetus to be gained from swinging them)’ worked with both legs. So I did a few of those.

Unfortunately, although I could do the exercises, I paid for them the following day with worse sciatica. ‘Old enough to know better’ comes to mind.

Clearly, long car journeys and vigorous exercise were completely ruled out – so we did the only sensible thing and drove four and a half hours to the Lake District to do some fell walking. 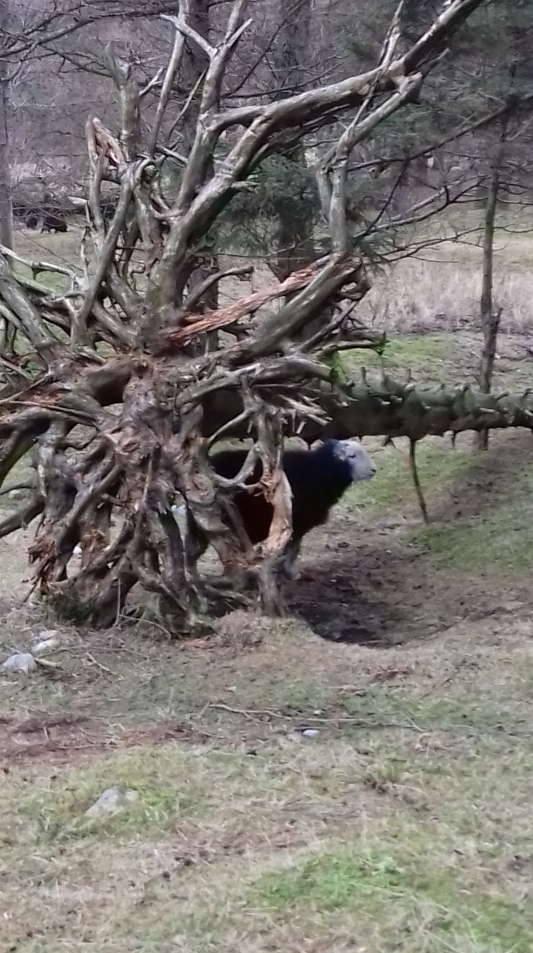 An experienced hill walker – a Herdwick sheep, I believe

It was a long weekend that had been arranged months previously with three other couples – the third time we’ve done the trip and not one we’d ever want to miss. It also gave us the opportunity to stop off at my sister’s to see my father who moved in with her a while ago. It was just two days before his 94th birthday so that trip was even more essential. 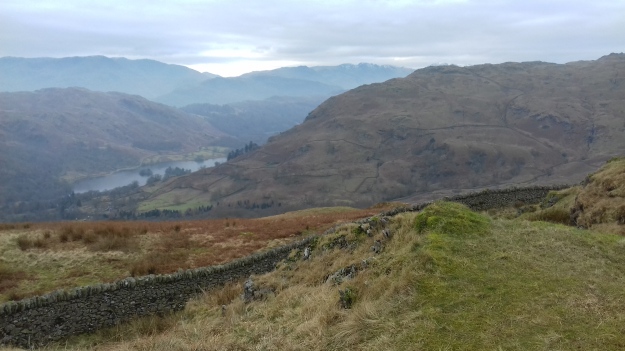 The sun is (almost) seen in the Lake District in January (Rydal Water or Grasmere?)

We were in Ambleside and the trip was great and, as ever, the Lake District was spectacular. We walked, ate, and I nearly cycled (I just took a mountain bike but some of the others had road bikes so I gave it a miss). As it was, the closest that I did get to cycling was working on a communal jigsaw of a stage of Le Tour in (I think) 2012.

The walking was fantastic (but very cold) although I spent the whole time not knowing where I was, where we’d come from or where we were going. In two walks we did well over 13 miles and 6400 ft of ascent – not record breaking but OK for a non-walker.

[If you like pointless trivia, how many lakes are there in the Lake District? Altogether there are over 30 bodies of water over 0.1 sq km, and more than 80 bodies of water in all, including reservoirs, but there is only one lake.

The lake is Bassenthwaite Lake – the others are ‘meres’ (eg Windermere – so ‘Lake Windermere’ is both wrong and tautologous), ‘waters’ (eg Ullswater) or tarns.] 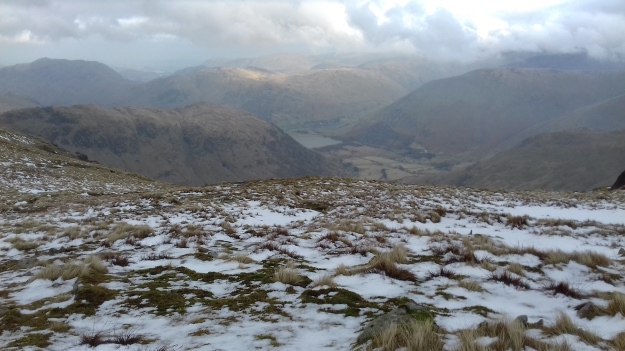 It was cold – even without the fierce wind chill

Returning on Sunday, we just had time to get things turned around before getting ready to head off for me to deliver the eulogy at an Aunt’s funeral the Monday. RIP my Aunt Joy.

So, sort of active – but a world away from the cycle training I’d want to be doing at this stage.

However, it would be churlish not to appreciate what I can do – it’s remarkable that I could do the pretty strenuous walking when it still hurts to get up out of a chair. Two of my friends on the trip are a Consultant Rheumatologist and a Consultant Orthopaedic Surgeon – both very talented and eminent in their fields – and neither is sure what I’ve done. Two of the others are Vets – they thought it best simply to put me out of everyone’s misery.

All in all, I can’t help but think that this getting old business is over-rated. 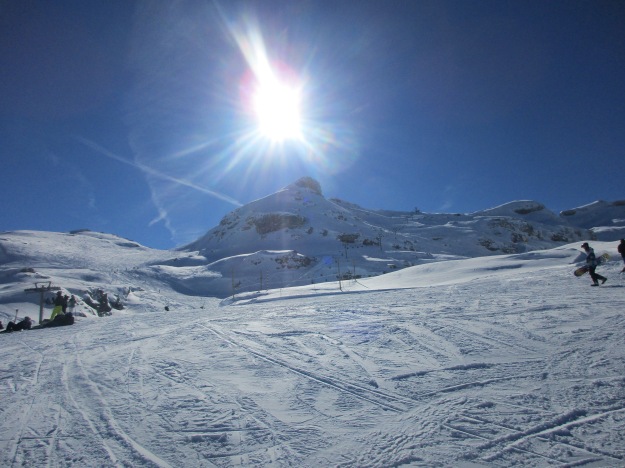 Not Meribel, not 2017, but sort of appropriate

I hope that everyone had a great Christmas and I wish you a happy, healthy and successful 2018.

The number of blogs that have been talking about rides over the holiday period has been rather chastening as, for me, Christmas was a bit of a rush job with no cycling at all.

Our boys (now in their mid 20’s so perhaps I should try to say ‘sons’) finished work Friday and we had a really good, social, few days before leaving at 6am on Boxing Day to drive to the French alps for a week’s skiing thanks to the kindness of one of my brothers-in-law and his wife who have a very up-market chalet in Meribel.

With one of those really frustrating hold-ups on the autoroute (crawling along and stop/start for over an hour before entering a coned off single lane system where the only thing to see was a van picking up the cones) we arrived a bit after 9pm (French time).

The chalet is on the 4th hairpin of a small private (un-bulldozed) road and after over 750 miles of driving, the car got stuck in the snow at the second hairpin, within sight of the chalet. (Note to self, front engine and rear wheel drive with ordinary road tyres is not good enough for snow covered hills). Putting on snow chains in the dark, in the snow, in the cold, after such a long drive defeated me – so the car stayed at the bottom of the hill for the duration. 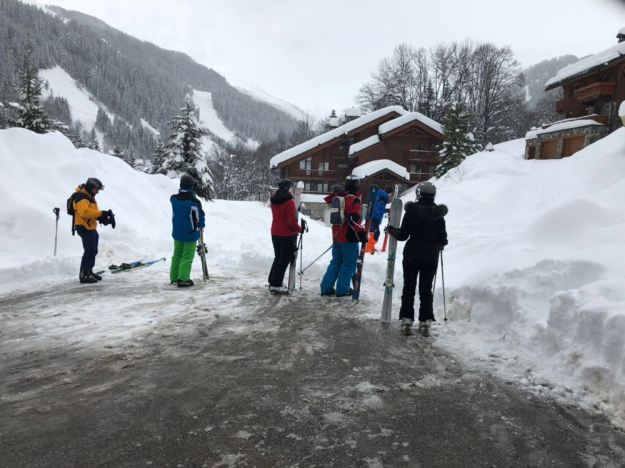 Ready to ski down the road from the chalet

Happily the snow continued and we had a great time with terrific food from an excellent young chalet chef, and very good skiing, although I didn’t get anywhere near last year’s 94kph max speed. Although the sciatica had limited me to two turbo sessions in the last 6 weeks, the legs held up well.

We saw in the New Year twice – once at the resort centre where the ski school instructors put on a torch lit descent and fireworks – and then an hour later back at the chalet with the TV coverage of the London celebrations.

Sadly, we had to leave at 8am on the 1st to get the sons back for work on the following day. Another 750+ miles but this time my back got very sore and now feels a bit like the sciatica has returned (but not as badly as before, and more in the lower back than shooting down the leg).

All of which is a long way of saying it looks like ‘three steps forward and two back’.

I read a newspaper article recently about 62 being the pivotal age in determining whether you are likely to descend into infirmity. At 62, that’s a bit pointed but I’m going to head in the other direction and do increasingly daft things on the bike so this will not turn into an old man health whinge!

Looks like I need to think about lower back flexibility and strengthening … but carefully.