I’m feeling that the cycling mojo is returning. I certainly lost it after the ride out to the alps. The bike has a new chain but bears the scars of battle.

Very few professional cyclists ever have a realistic chance of winning a Grand Tour. Simon Yates had the Giro leader’s jersey for 13 stages earlier this year – and then blew up spectacularly late in the race. It seemed possible that his chance had come and gone.

I think that makes his La Vuelta win even more special – rather than let the experience at the Giro crush him, he learned from it and came back stronger.

Although helped a bit by the absence of some big hitters – and the indifferent form of some others – he won with a very mature and disciplined performance. Perhaps a bit more ‘Froome control’ than ‘Pantani panache’ – but a great victory all the same.

… and even a Grand Tour winner not riding for Sky!

I don’t think any brothers have ever won Grand Tours – much less twins – so what are the prospects of a win for Adam Yates in the near future?

Rather more prosaically, my achilles’ has continued to improve, helped by a day off on Saturday, so we ran again on Sunday morning. Normally we run for about 6km but this time Mrs O thought she should go further so we ran 9.5km (6miles). Not too fast, but a creditable distance.

Later on Sunday, along with watching Lewis Hamilton win the Singapore GP and seeing Yates safely home in Madrid, to balance out all the physical stuff we catered for our souls.

There is a talented music teacher in the village and she puts on occasional concerts for her pupils, former pupils and other young musicians. This time it was Aleksei Demchenko, an award winning pianist who played pieces by Scarlatti, Schumann and Chopin.

In the same way that I have no fast-twitch muscle fibres to speak of, I do not have an artistic bone in my body – but I really appreciate it in others and the concert was wonderful.

I don’t listen to music on the bike or while running (I didn’t even take my ipod on the ride out to the alps) but if I did it would have to be classical music. Popular music can evoke many emotions but only classical music can take you completely out of this world.

Running with Mrs O is a good way of putting some miles into my legs but ‘proper’ marathon training is going to require some longer and faster runs so I planned to do a quicker 10km on Monday morning. Unfortunately, I woke with sore achilles tendons again. They weren’t any worse than they have been over the last 10 days or so but it didn’t seem sensible to try a faster run on them. It puts me between a rock and a hard place:

Typical compromise ‘solution’ (which, of course, means it’s not a solution at all): I’ll stretch, run gently with Mrs O and use the bike or turbo this week.

I hadn’t expected to be in ‘injury management’ mode this early.

The bike is an ‘Eastman’ – Indian, I think. Goodness knows why anyone would have brought it back to the UK. Next year the plan is to attach a rack and a basket and fill them with flowers.

The Achilles’ have continued to niggle but, foolishly I’m sure, I’ve ignored them and kept on with some reasonably light exercise. Mrs O and I ran for 5km (3miles) on Thursday and I did my now regular run to the gym and back with a friend on Friday – with 30 minutes of weights in between.

I avoided the calf raises which I think caused the problem with the Achilles tendons last week and have been keeping up the stretches, the sit-ups, press-ups and crunches. I suppose I should have stopped the running until they were properly better, but they are improving in spite of it so I guess it’s doing no serious harm. I’m rarely accused of being sensible these days but at least I’m avoiding any longer runs until the tendons settle down again.

Friday evening I got back on the turbo for 42km (26miles) in a reasonably gentle hour (without much ankle flexing).

So, that was four runs and two cycles and a gym session in six days – nothing too extreme but enough to keep it all ticking over.

It’s turned a bit autumnal here, colder and with heavy morning dews – but I managed to get the lawns mowed. It’s a bit of a gauntlet at the moment as the willow has decided that it’s main aim in life is to sweep the ear defenders off my head as I drive the mower beneath it and I had to pick up a wheelbarrow load of fallen apples to stop them blocking the grass pick-up system. First world problems, eh?

However, it’s a relief to get it done. I know it’s strange but a newly mown lawn, an empty bladder and a full tank of fuel on a long journey are all disproportionately satisfying.

Bravo, Simon Yates for winning the Vuelta (subject only to some disaster on the final, largely ceremonial, stage tomorrow). Another astonishing performance by a British cyclist – and the three Grand Tours won by three different Brits in 2018!

Also, bravo Vicky Holland for winning the triathlon world title and James Cooke for winning the individual world modern pentathlon title (in what must have been one of the great finishes of recent years).

We might be going to hell in a handcart generally – but at least the sport is pretty good. 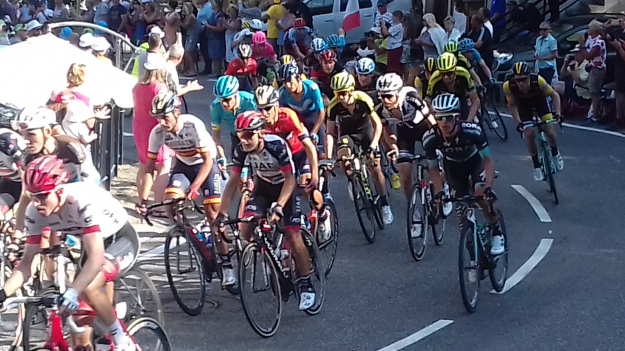 OK – this is the TdF but you get my point?

The start of La Vuelta has been steady if not explosive but it’s always a great race so I have high expectations.

This year, it’s a high quality field with some big names (like Quintana, Pinot, Nibali, Porte and Aru) looking to rescue – for a variety of reasons – slightly disappointing years. The absence of Froome and Thomas is a shame (but understandable) but I suppose the highlight so far was the second stage win by home favourite, Alejandro Valverde, at the age of 38.

At the time of writing, there is only one of the 254 Transcontinental Race starters out on the course (except that there is no set course). Neil Matthews is a Brit and is over 560km (c.350 miles) from the final checkpoint – which itself is probably 500km (c.310 miles) from the finish. He’s been going for over 4 weeks now – an effort of legendary proportions.

Related to the Transcontinental Race, I’ve been reading a bit about post challenge blues. It seems that it’s a common thing to feel listless, directionless and even depressed after major challenges. I guess it’s to do with the fact that the preparation is pretty all-consuming and the event itself is full-on and both mentally and physically demanding – and then when it finishes there is a big gap where all that was.

My ride to the alps was only 84 hours of elapsed time and my training was not exactly all-consuming (I realised that my longest training ride was 121km – 76 miles – and I then did three days with an average of more than twice that). However, I certainly spent a lot of time thinking about it and have noticed that there’s been something missing since I got back from France.

I’m wondering if I’m actually more of a challenge junkie that I’d realised.

Having promised Mrs O that there will be no silly solo challenges in 2019, the most likely event to focus on seems to be the Rotterdam Marathon in April next year, with the aim of running it with our younger son (and with our older son also showing interest).

A marathon is never easy but it’s not quite at the very extreme end of the challenge spectrum partly, I guess, because it’s just a one day event and is only going to last for around 4 hours (all being well).

This week I’ve been out running 5 of the last 6 days for about 32km (c. 20 miles) and done a gym session. I’m not yet quite running at 4 hour marathon pace but it’s early days.

More running and back on the turbo trainer this week – enough of moping around!