Saturday morning’s run was the regular 10 (and a bit) km – about 6.3 miles. A tiny bit slower than the last couple of times but the speed is probably the least important thing about it at this stage.

Both calf muscles were sore after the run, so Sunday’s cold and windy run with my wife was on heavy and slightly painful legs – but that made it about 16.5km (a bit over 10 miles) for the two days.

No such leg problems in Barbados – but those runs were shorter, slower and on more forgiving sand so perhaps that made a difference. It’s a bit of a worry but for now it looks like it’s back to the (deservedly) much-maligned long white compression socks during and after runs – and more attention to warming up before, and stretching afterwards.

Monday morning it was back to the gym and on Tuesday I drove to Bournemouth to prepare for the phone line fitting on Wednesday (including boarding out a part of the loft so the engineer could route the new line through it). Loft boarded and internet now working.

In recent months I’ve been quite good at doing planks daily (the routine is for 5 minutes of plank variants) but I’ve now added press-ups, sit-ups and crunches. In theory it’s to help the core for cycling and running, but I’m sure there’s more than a bit of vanity in it as I try to pursue a flatter stomach. I doubt that a six-pack is within reach – and I think it would be a bit weird on an old bloke in his 60. In the unlikely event that I ever achieve one, I’ll keep it very much to myself.

Gym again on Thursday morning and then up to Kingston-upon-Thames on the edge of London for a Snow Patrol concert – my wife is very keen on them. Another performance in a small night club venue like the one we went to a year ago (and standing in the very front row again).

They were excellent, but that’s four times I’ve been to see them and not one of them has ever bothered to come to watch me run, cycle or work out at the gym. Where is the give and take in that?

To London after the concert, only to be woken up at 2am by another alarm-alarm triggered by a power outage, like the one in October. When we got back it was the mains trip switch again – blasted thing.

No party politics here, but we had another General Election on Thursday. As the years go by I find it more difficult to find one party that offers a total package that I like. The party I tend to think of as being likely to run the economy better is not necessarily one I’d prefer to see spending the money.

The Conservative Party had a significant win which probably highlights two things: first, the all-consuming importance of Brexit; and, secondly, a negative perception of the leader the Labour party and the direction he was taking it. Even the eternally important mantra ‘(it’s) the economy, stupid’ looks to have taken a bit more of a backseat than usual.

The more I see of politics and politicians, the more I wonder if anybody should ever vote for someone who puts themselves forward for high office (although I appreciate that would make elections difficult).

We were back out on the slopes Monday and Tuesday – then it was packing up on Wednesday to drive back to the UK on Thursday.

It snowed solidly and, clearly, it was snow chains for the trip down the mountain. That wasn’t too bad as I could put them on in the underground garage – taking them off in the snow in the valley was another matter entirely.

We had about 550 miles to drive through France – and nearly all of it with a good covering of snow either side of the road. Despite that, the roads were excellent and clear. It began to snow as we got west of London and driving along the M4 at about 9pm it started to settle.

We saw one gritting lorry near Ashford (Kent) and not another for the whole 166 mile journey, despite constant claims that gritting was in process. At one point it seemed that we might be using the snow chains again but the snow eased and only started more heavily again as we got home.

A great holiday – 16 days, 1780 miles, a lot of skiing and the advantage of having both sons join us.

Three falls: one while standing still and tripping over my own ski pole (very cool); one on a black mogul field (very expected); and one entirely by surprise (but my wife says someone skied over the back of my skis which might explain it). I went over onto my left shoulder – after 5 days I don’t yet have full movement back.

Three falls is probably OK – too many falls would be depressing: no falls would suggest I’m not pushing hard enough.

In normal life I tend to shy away from potatoes, bread and cheese but those are the main staples of the Haute Savoie diet. Indeed, the wonderful dish ‘Tartiflette’ was actually created to promote sales of the local reblochon cheese. We ate and drank well but I came back still under 70kg which I will treat as a victory.

Some very enjoyable reading too – I managed to finish

We were supposed to be up to London for a Snow Patrol concert at the Wembley Arena on Saturday and that looked a bit unlikely to be happening as the snow fell for much of Friday – something like 8 inches of the stuff.

If we’d had to head to London then, I doubt we’d have gone, as the UK was again proving incapable of dealing with fairly modest snowfalls. Luckily, by Saturday things had settled a bit and we were just on the edge of the worst of the snow, which was mainly south and west of us.

Snow Patrol were excellent, but they had set the bar supremely high at the more ‘intimate’ concert we went to last November.

Luckily, in snow terms, London was much clearer than Oxfordshire so I took my running kit but only just managed to force myself out on Sunday morning – my first run for three weeks because of the skiing.

It was hovering just above freezing but was bright and clear I ran from West Kensington around the Serpentine (the lake in Hyde Park) and back. Altogether 11.4 km in under 1 hour 3 minutes at 5.30 min/km (7.1 miles @ about 8:52 per mile), despite the road junctions and the sore left shoulder. To my surprise, inside 4 hour marathon pace and it felt pretty good. Clearly, I should be doing more skiing and less running in my training ….

It will be interesting to see how the Achilles tendons react – they had better behave as there is a lot of running to be done between now and the Rotterdam marathon on 7th April (once the snow clears).

So, the training week ended with some skiing but only one run – a fairly dismal effort over the last 4 weeks as life has got in the way of the training. If someone were paying me to do the running perhaps I’d adjust the priorities but I can’t help but think that life first and running second is the right way round for a – very – amateur runner like me. 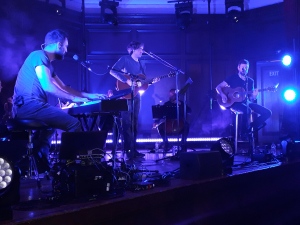 This is the first week of my 20 week training programme for the Rotterdam Marathon on 7th April 2019. Bizarrely, the programme started with a rest day!

It looks like a bit of straight line thinking by the programme designer – subsequent Mondays come after a long slow run on Sunday so it seems sensible for them to be rest days. By definition, that’s not the case for the first Monday!

The plan has four runs each week (two at marathon pace, a session of intervals/speed work and a long slow run) and one day of cross-training. For the first few weeks the two shorter runs are 4 miles each and the long run starts at 6 miles and increases by a mile a week.

My aim had been to arrive at the start of the training in good shape, ready and able to take up the challenge. I failed and I arrived with dodgy Achilles tendons – either the result of age deterioration, poor running style or stupid calf raises with too much weight on the gym’s leg press machine.

The result of Sunday’s run was a sore right Achilles for the rest of the day, despite an ice pack, stretching and compression and it was quite painful when I woke on Monday.

On the plus side, it was no worse than it has been for the last couple of weeks and the left Achilles was not too bad at all.

I’ve said that I will be flexible about the training programme and am starting the way I intend to carry on by deciding that the run with my son on Sunday actually took place on Monday and so counts towards the first week’s training.

In part, that’s because we were up in London on Monday. Mrs O won tickets for us to go to a London performance by Snow Patrol (I like them but she really likes them).

I was not too enthused but I have to admit that they (with just a three-man lineup, no drummer or bassist) were absolutely excellent. It was a small, intimate, venue (no more than 600) and we were in the front row. I just hope that Gary Lightbody didn’t look down from the stage, see a 63 year old retired solicitor, and wonder if that’s an ominous sign as to where his career is heading.

The key questions now are:

Although, originally, I hurt both Achilles, I re-hurt the right one more recently. The fact that the left leg has certainly improved suggests that perhaps carrying on as I have been, with a little running but more in the gym and on the turbo, will work.

What is clear is that I’m not going to be running four times a week just yet. So, for now I’ll try to run twice a week, one run of about 4 miles and the other being the long slow run. I’ll cover the other two scheduled running days with the turbo trainer, adding a gym session for the official cross training day.