Giant in more ways than one?

I’ve realised why, after last Sunday’s ride, I was less than keen on riding the Giant TCR2 out to the alps as planned.

Its a triple and although I liked the smaller gap between any two chainrings, the gear changing wasn’t set up very well. Interestingly, the Rose with its compact and a biggest cog of 32 on the back gives me a lowest gear a tiny bit lower than the Giant with its 30 on the front and 28 on the rear.

The Giant is about 1kg heavier than the Rose but, mainly, it felt too big, especially the reach to the handlebars. When I finished I measured the distance between the centre of the handlebars and front tip of the saddle on the Rose – 51 cm. I did the same for the Giant – 56cm!

I’d got used to the Giant in the 5 years it was my main bike – when I bought the Rose I was between two frame sizes.

I contacted Rose in Germany and their representative in the UK to ask for advice on which size to buy. The Germans came back and said the smaller one – the UK rep said the larger one. I went for the smaller one.

I could immediately tell it was smaller and actually bought a longer stem to reproduce more of the Giant’s geometry but never got around to fitting it as, by then, I’d got used to the Rose as it was. Surprising what you can get used to. 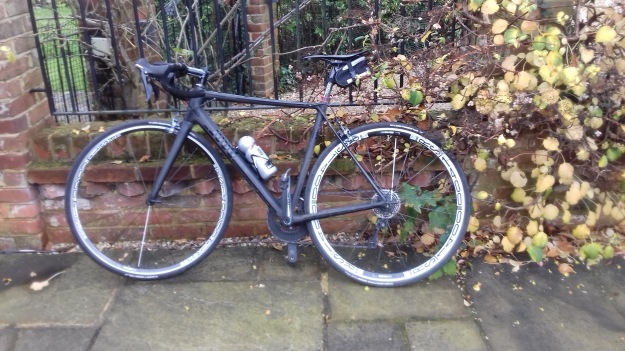 A Rose by any other name would smell as sweet

So I’m not surprised that the Giant is bigger … but 10% on that measure?

I’m surprised that neither has caused me any discomfort or injury – perhaps I’ve shrunk over the years between the two bikes.

The question is which is right (or more right). I’ll check the distance between front of saddles and steerer to see if I’m right in thinking that it’s mainly down to the length of the stem (I notice that the Giant’s is a 130mm).

Perhaps I need a bike fit.