New and old – the Rose and the Giant

There are definite signs of the approach of winter in Oxfordshire. The beech trees are starting to turn  and the horse chestnut is covering one of the paved areas in the garden with leaves.

That is the end of “Out of Town’ with Jack Hargreaves (sadly, the fact I can remember that dates me).

While appreciating that hardier cyclists just keep cycling throughout the year, and richer cyclists simply head south, my thoughts now turn to the end of the regular cycling season in an effort to remember what normal people do with their time.

Although normality does intrude occasionally, I prefer to focus on four key things at this time of year: thinking back on the cycling year just gone, planning next year’s cycling, tinkering with bikes and working out how to stay reasonably fit so that getting back into the swing of it in the Spring isn’t too awful (important as the White horse Challenge is in April).

The cycling year just gone: 2017 has been a pretty good one – I missed my 5 hour target for the 90 mile (145km) White horse Challenge by 5 minutes, but set a PB, and rode strongly in the sportive on 1 October, even if we did take the wrong route. Better was coming home first in the club’s 70 mile (112km) sportive (even though it’s not a race) but best of all was completing my ‘everest’ in July. Considering that I so very nearly talked myself out of the attempt that morning, and went into it sure it would fail, I’m delighted to have done it.

Planning for 2018: The White Horse Challenge remains unfinished business – so I will have to do that again, still trying to beat the 5 hours. The week’s cycling in the alps is (almost) a given, but the big difference this year is the aim of cycling out there, unsupported. It will probably be about 750 miles (1200km) and I’d thought about doing it alone but one of the friends I ride with might be able to come with me – and I’d certainly not try to stop him as he would be excellent company.

One other thought I’m toying with is that doing the bicinglette (Ventoux 6 times in a day, twice by each of the routes) and then adding on one more ascent from Sault would gain access to two fairly exclusive clubs – the bicinglette has currently been achieved by only 217 people and the ‘high rouleurs’ society (for 10,000 meters of climbing) currently has only 300 members. Sounds crazy but less than 1100 metres of climbing more that the everesting. The big problem with the bicinglette is that it can only be done on Ventoux!

Tinkering with bikes: If I cycle out to the alps, I’d probably take my old 2006 Giant TCR2 and leave it out there – that would help solve the potential issue of getting it back to the UK and would mean I’ll always have a bike there in case we decide to fly out in the future. I’ve found some pedals and I’m trying to pick up a replacement right hand brifter, but the main job has been solving the issue of the stuck seat post. It has been wedged in very firmly for a few years and has defied everything, including a can of WD40 and putting the post in a vice and using the leverage of the whole frame to try to twist it, without success.

In the end, on Monday, I decided to cut it out as it was not in perfectly straight and was not at quite the right height. I cut off the post (metal, strangely, considering that it’s a composite frame) and with a hand held hacksaw blade cut the down length of the post from the inside. It was a hell of a job which involved much bleeding and swearing but eventually I did it, without cutting much of a groove in the inside of the frame itself. I did my cut at the back of the post so it has strengthening from the rear stay assembly and from the seat post clamp itself – I’ll keep a watchful eye on it to make sure it’s still safe. I’ve ordered a carbon replacement post so I might have taken some weight off the bike, as a by-product. 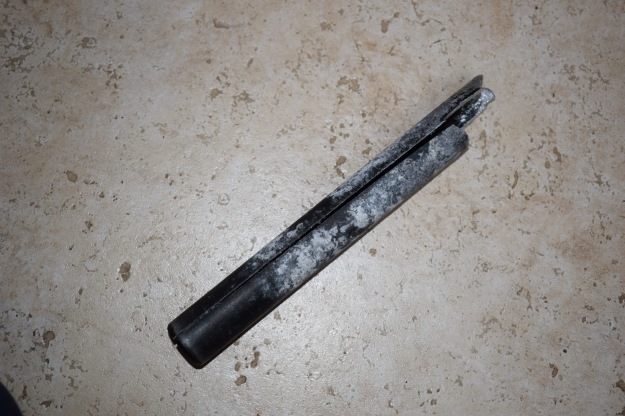 Better out than in

An odd thing that has occurred to me is that when I bought the Giant I was terrified of hills and looked for a bike with a triple. With its 28 on the back, its bottom gear is actually a tiny bit higher than my Rose with its compact and a 32 on the back! How times change.

Staying fit: as I get older, I tend to feel the cold more so it’s back to the turbo when it’s not possible to get out in sensible weather. Beyond that, I’ll keep running with Mrs Omil twice a week and will start the squats, lunges, planks and sit ups to keep the legs moving and the core strong.

It’s not yet too cold – with luck plenty more cycling on the roads to come yet.